POE: I Enjoy Playing ARPGs Most When I’m With Friends

Path of Exile is a free-to-play Diablo clone that’s seriously worth playing. In Path of Exile, the community seems pretty friendly, and the MMO-style shared town spaces give you opportunities to socialise or trade directly with your fellow adventurers. Path of Exile is a cracker of an old-school action-RPG. And it’s free. Do you like Diablo? Want to take your first steps into the genre? Visit the official website here. 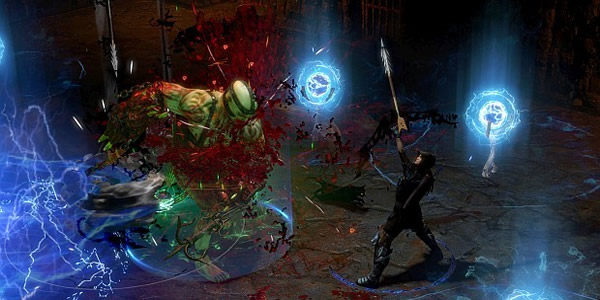 The skill tree is huge. I really should have planned ahead where I pout my skill points in but I’m taking it one step at a time. Even then it feels like I can have a witch who focuses on summoning minions to aide her, or go down the route of elemental magic with another witch. Like any ARPG, you gain power through leveling up and finding new items. But I think feeling powerful in Path of Exile originates from the death animations of all the hundreds of enemies.

With any ARPG it’s all about the end game, and how it can keep you interested once you’ve seen all the story content. Similar to Diablo III’s Rift system, Path of Exile has maps. Whatever character/class you decide to play in Path of Exile has usually been exiled for the wrong reasons. PvP does exist in a Path of Exile, but I’ve not personally bothored to play it. I prefer to pit my wits against the monsters.