“EA Madden NFL 18 Challenge,” a one-hour primetime special produced by Electronic Arts that will air Dec. 27 (8-9 p.m. ET/PT) on the network. If you want to know more details, you can also find in U4GM.com.

“Madden NFL” is one of the most popular video games of all time and the “EA Madden NFL 18 Challenge” special will chronicle the competitive action of the tournament and highlight the behind-the-scenes journeys of the eight world-class players as they compete in the event. 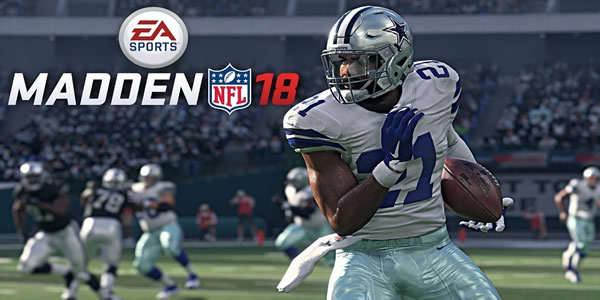 “Since the launch of the Madden NFL Championship Series, our goal has been to make ‘Madden NFL’ competitive gaming accessible to as many fans as possible,” said Todd Sitrin, SVP and GM of the competitive gaming division at EA. “The partnership with The CW and airing of the ‘EA Madden NFL 18 Challenge’ special marks a major step forward, not only in broadening the fanbase for competitive ‘Madden NFL,’ but also in highlighting our players – the real stars.”

“EA Madden NFL 18 Challenge” The CW’s fourth eSports special of 2017, will give viewers an inside look at what really goes on in the intense world of competitive gaming, as well as provide a deeper portrait of the top “Madden” NFL competitors, their journey to the challenge, and a look at the other side of the competition to claim the “Madden NFL Challenge” belt and championship prize.

“We are thrilled to partner with EA and Madden NFL, one of the most well-known games in the world, for The CW’s final eSports event of 2017,” said Rick Haskins, EVP of marketing and digital programs, The CW. ” ‘Madden NFL’ is an iconic franchise, with millions of dedicated fans, and we’re excited to bring our viewers behind the scenes and up close to see some of the best ‘Madden NFL’ players in the country compete for the title.”

” ‘Madden NFL’ continues to be an incredible platform for the league to reach and engage with our younger fan base, and The CW’s vibrant audience is a perfect match,” said Christopher Halpin, chief strategy officer of the NFL. “The CW has taken a unique perspective on eSports, and we are excited they have partnered with EA and the NFL to showcase the stories and drama of the ‘Madden NFL 18 Challenge.’ ”

The “Madden NFL 18 Challenge” is very important in the four EA “Madden NFL 18” major events in competitive gaming. The 2018 Madden Challenge will run Dec. 27, live-streamed across digital platforms, concluding ahead of the CW’s broadcast. The eight competitors will have a lot on the line as they not only vie for the title of “Madden NFL Challenge” champion, but also a share of a $150,000 prize.