FIFA 15 News: we have collated and reported in our own FIFA Expert way, the very latest news from EA Sports regarding the much anticipated FIFA 15 ! ! ! ! They have gone big on the visual aspect and realism that the next gen consoles have allowed and are saying, on FIFA 15, you will ‘FEEL THE GAME’. 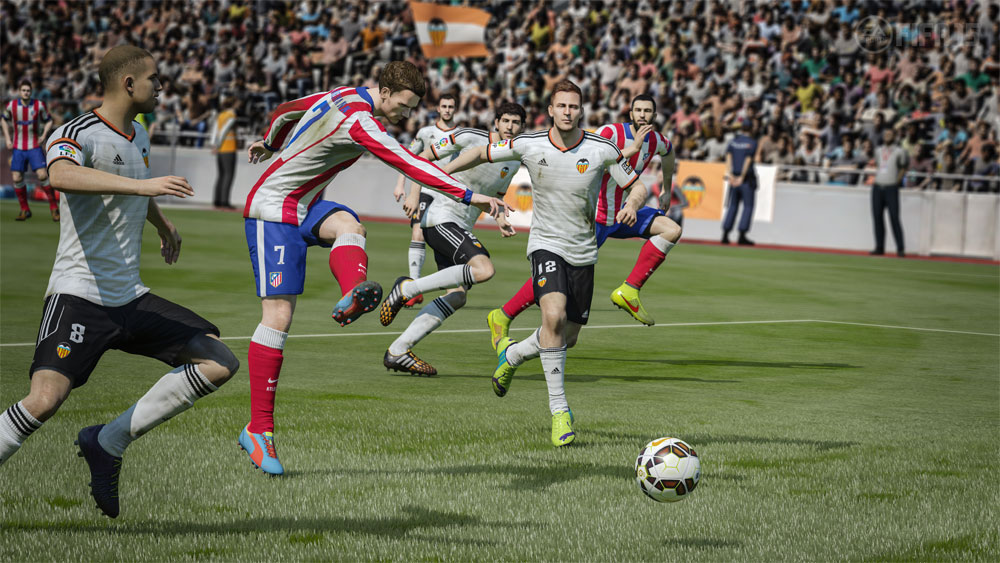 Living pitch – EA pushed this very strongly at E3. Pitches will now wear throughout the 90 minutes and beyond, you’ll see player footprints and they will now leave marks on the pitch where it may become scuffed after a slide tackle, for example. Player kits will now become dirty throughout the game items such as the corner flags will now move if players collide into them. A cool new feature we like is that you will see and hear the post/bar shake after a powerful shot has struck it.

Another aspect of this visual focus in the stadiums. For FIFA 14 next gen they focused on these living worlds and bring the stadiums to live. For FIFA 15 this was always going to be better with the more powerful next gen consoles. Stadiums will have club specific atmospheres and crowds will now react to in game scenarios much more intelligently. For example, you’ll see the Liverpool kop before and towards the end of the game with their scarves held aloft belting out their anthem, ‘You’ll never walk alone.’, you’ll see ‘The Yellow Wall’ at Dortmund and you’ll see Man City fans doing the Poznan if their team is winning easily towards the end of the game. This is something that all adds to the believability of the game and brings realism to the whole experience.

Finally, player emotions has also been worked on. Although they are using the same facial capture tools, players hair will now have a freedom of movement so you will see that incredible David Luiz barnet bouncing up and down!

Ball Physics
This was always going to be something they pushed and improved upon for FIFA 15 because of the success of the Pure Shot they introduced for FIFA 14. These ball physics have now been rebuilt and bettered AND have been brought to the ground. This is great news, for us and anyone who loves to play the game by passing and not just relying on pace. Players will now have to react to ball momentum and the ball can ow recognise where it has made contact with and spin/bounce accordingly. What they mean is, if the ball makes contact with the outside of your players foot or the very end of the toe, the touch is far more likely to run away from your player whereas if they had controlled it flush with their instep, it would be a far more accurate touch. This is going to improve the feel for the game. It must be said that the ball will not react to the pitch (yet!) so you won’t get any bobbles or weird bounces just yet. (Perhaps something we’ll see for FIFA 16?)

Responsiveness
This is another word we’ve been hearing a lot from the guys at EA. In short, they are basically reassuring fans that they are working to fine tune and balance the game as much as possible. FIFA 14 had several areas of the game which were over powered and unbalanced (headers, crosses, corners and lobbed through balls). They are saying that the responsiveness of these areas are being addressed and that the new ball physics improvements will go a long way to helping to balance these out.

Other items coming in the near future
These areas below are all items which we will be hearing about very soon for FIFA 15 and we’ll research and write them up as soon as we hear anything at all.

New skill moves – no final number yet but there are new flicks and a fake pass we’ve heard about.

New celebrations – There will be several new celebrations to keep things fresh and the AI players will now react to more important goals so late winners or goals in derbies will get all the team rushing over to join in the celebrations!

Licensing – they’ve been very closed about this area so far but have said more news will follow.

Team mate controls from set-pieces – We’ve heard that you can control players from your set-pieces by flicking the right stick to select and move men in the box before changing back to the corner taker using R2/RT. We’ll let you know more about this as we hear it.

AI tactics – this area is a bit vague and we’re hoping it doesn’t effect your team without you ordering it to. You can now park the bus and change to ‘in the mixer’ style but we’re REALLY hoping this doesn’t happen automatically.

If you have ANY thoughts at all about these items then please leave us a comment, we’d love to hear your thoughts on this FIFA 15 news.More news can be click here.